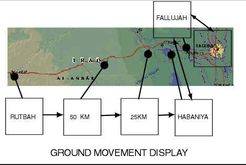 Covers the unique situation in Iraq during WW2. The recent coup could provide the Germans with a ripe opportunity to step into the Middle East. The Iraqis requested German support when the British violated an agreement made in 1931 restricting British troops on Iraqi soil. Instead, the British created a major airbase at Habbinaya, east of Baghdad. In late April, the Iraqis began attacking the airbase with their 70 aircraft, 28 artillery guns and 20mm AA. The small British force had only obsolete aircraft to defend with and opposed by 5000 Iraqi troops. However, the Iraqi morale was low and it was hoped that the Luftwaffe would change this. Thus, began a month long battle. Hitler was preoccupied with events and only agreed to sent a "token" force to support the Iraqis commanded by Captain Junck. Junck had the job of stopping the advancing British relief force, destroying the Habbinaya airbase and raising Iraqi morale so their troops would occupy it. The game comes with 150+ counters, various air displays, ground movement charts, ground and air units, 24 cards and 15 pages of rules. Both players will secretly plan their aircraft and ground units and hope everything then works out during the game turn.