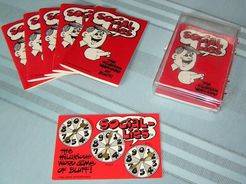 Social Lies is not a test of your knowledge. You make up a definition, present it with a straight face, and you are telling social lies. Social Lies is usually played with two teams. One player holds the book with the correct definitions. The other five books have random, nonsense lettering in place of definitions. Players holding those books must fake or bluff a definition. The six players holding the books present their definitions, in turn, to the opposing team. Neither team knows who holds the correct definition. The opposing team members then guess which of the definitions was correct. Each correct vote earns the receiving team one point. The object of Social Lies is to score the highest number of points against the opposing team. The words are numbered and the word for each round is determined by spinning the arrows (hundreds, tens and ones). A spin of 000 equals 1000.