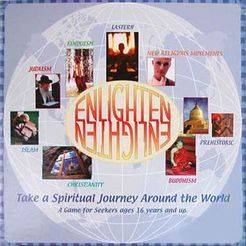 Enlighten helps players compare major religions. Players answer questions about Christianity, Judaism, Islam, Hindu, Buddhism and New Religious Movements while circumnavigating the playing area. The winner is "enlightened." Has the traditional square board through which players move by casting a die, but the board is divided into the six major religions and three historical categories -- prehistoric, Eastern and paganism. As players successfully answer questions, they enter the Enlighten Path, where they have to identify quotes from major religions and philosophical leaders. Charles Flores, a friend of the designers who was getting a master's degree at the California Institute of Integral Studies in East-West psychology, helped write the questions.