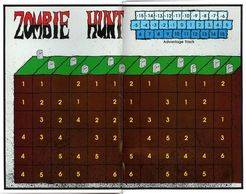 Strange things are happening over at the Smithville Cemetery - it seem like the residents there are unhappy about their surroundings and looking to move uptown! It's up to a small band of brave heroes to put the Zombies in their place - or become and undead appetizer. Zombie Hunt is a boardgame for 2 to 4 players. There are two sides in the game, but each side can be run by more than one player. The object for the Zombie player(s) is to tunnel out of their graves and overwhelm the Human defenders before the sun comes up. The Humans player(s) must stem the Zombie tide and hold on - time is on the Human's side, but there are an awful lot of Zombies... Published in TSRs Comics Module RIP #2.