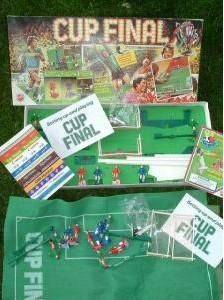 This game is very similar to the Palitoy "Striker" soccer game, but without the build quality or fun factor. The pitch is made of a peculiar green material with a strange foam backing that sticks to the carpet; the goals are identical to the one in Striker, but with plastic netting. The game comes supplied with two teams - red and blue, but instead of 5 players per team of Striker, Cup Final only has 3 players on each side. The two outfield players are plastic with a metal kicking leg, with one player having a bent leg, and one a straight leg. The straight legged player had a scooped foot for lobbing the ball, but this mechanism doesn't work very well. The kicking action is controlled by a button on the back of the base as opposed to the "bash 'em on the head" mechanism used in Striker. Additionally, the figures are very badly designed, and the slightest movement causes them to fall over (are they Christian Ronaldo in disguise?). The goalkeepers are identical in design to the original Striker goalkeepers, as they swivel at the waist and have a crooked arm for throwing the ball out. The ball is not round, but more of a honeycomb. One half of the ball is coloured red, the other half blue. The team whose colour is on the top face of the ball when it comes to rest has the right to play the ball, so the purpose of the game is always keep the top face of your colour visible while dribbling. Basically it's a cheap reproduction of Striker by Palitoy. Avoid.