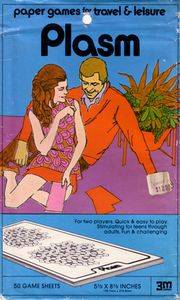 Plasm is played on a grid of pentagons. Scattered among the pentagons are a series of two, three and five pointed shapes which are shaded. The players take turns making either an "X" or an "O" in the pentagons. Their first move can be anywhere, but subsequent moves must be connected to a pentagon which they have already claimed. Points are scored by surrounding the shaded areas. The player who claims the last pentagon surrounding the shaded area claims it by putting their mark inside the area. Shaded areas are scored by the number of points they have. Play continues until all of the shaded areas have been claimed. The player with the highest point total wins. Part of the 3M Paper Games Series.