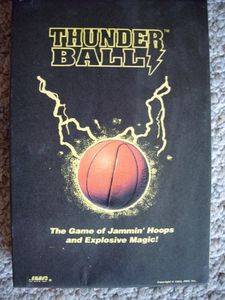 Thunder Ball is "The Game of Jammin' Hoops and Explosive Magic." A limited number of points are assigned various player skills - Shoot, Steal, Catch, Block and Intelligence - and then the NBA meets Harry Potter and arena combat in a fantasy basketball game to 10 points (five successful shots on the basket of your color on the hexagonal mapboard). Players are allowed two actions per turn with die rolls (augmented by player skill points) determining the success of actions ranging from shooting for a basket to using spell cards.