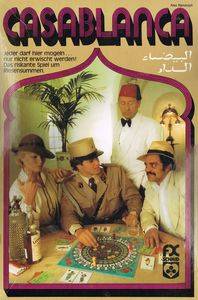 Players move around the board, trying to reach a symbol that corresponds with the symbol on the currently revealed card. If a player reaches that symbol, he gains the card. The bigger the amount of cards with the same symbol the player has, the more money is gained. The twist: movement is done by selecting chit, checking the back for a number, and moving however far you want to move, without revealing the actual number to the opponents. The opponents then have to accept your move or challenge the number on your chit. If they challenge the number, the player may either confess to cheating and pay a nominal fine or start a poker like bidding system in which the challenger must match his bid before he can see the chit.