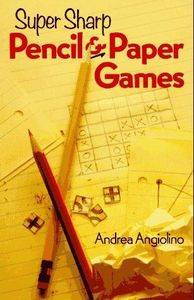 This pocket book is the American edition of "Giocare con Carta e Matita" and collects 39 games to be played with paper &amp; pencil (out of the original 50 of the Italian edition). Some of them are traditional, some are invented by more or less famous authors, a couple appear for the first time. A second section with a few strategy and tactics notes is included. In 2003 the book has been reprinted under the title of "Mind-Sharpening Logic Games". In 2008 an enlarged and revised edition appeared in Italian in 2008 as 101 giochi con carta e matita (ed. Sonda), while a reduced one for children with rewriteable boards has been published in the same year by Editoriale Scienza as "Battaglia navale e altri giochi con carta e matita".