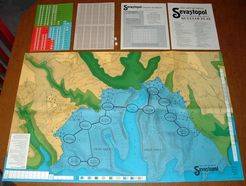 A regimental-level simulation of the British/French siege of the Russian city of Sevastopol during the Crimean War of 1854-1855. Like Lille, it is played on a hexless period map of the fortress and surrounding area, using a provided ruler to determine movement distances. Part of the Art of Siege quad.