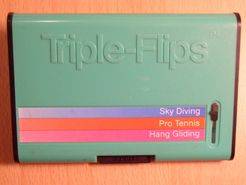 Triple Flips 9 includes Sky Diving, Pro Tennis, and Hang Gliding. Sky Diving is a 1-player game in which you hope to hit the target accurately. The closer you are to the target, the better your score. Your drift during the descent is controlled by die rolls, which indicate the direction of drift. Pro Tennis simulates a tennis game for 2 players. The areas of the court all have corresponding die rolls paired with them. Hang Gliding, for 2-4 players, is a roll-and-move game with some branches decided by the roll of a die, and others left up to the player's choice. The various paths symbolize air currents, including some sharp up-drafts and down-drafts. The players attempt to maneuver their pawns to the best-scoring landing zones.