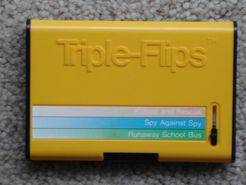 Triple Flips 5 includes Kidnap and Rescue, Spy Against Spy, and Runaway School Bus. Kidnap and Rescue is a capture-the-flag game for 2-4 players. Move to the captive, become the captive, and put your own pawn home. Everyone else continues to try to get the captive, which is now you. If someone catches you, they become the captive, and you re-enter from home. Try to get the captive home! Spy Against Spy is another intentionally lopsided 2-player game, but this time the effect is a little more like American football. The defender merely obstructs the offender as much as possible to minimize her progress over the course of ten turns. Runaway School Bus is a 1-player timed race, with the interesting twist that the timing is staged. There are five points along the bus's path where you can intercept it. You merely need to progress, by die roll of course, along your linear path more quickly than the bus to maximize your score. This game features a small misprint, since if you don't count the picture of a schoolbus as a space for the bus, getting 5 points is quite literally impossible. You can't get 14 out of two rolls of a six-sided die - it's low enough odds on three rolls.