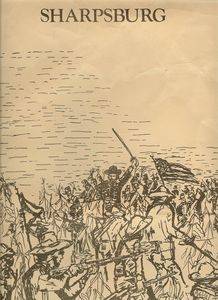 A detailed tactical simulation of the Battle of Antietam. Uses James Murphy's Battles of the War of the Rebellion rule set. Published in 1978, 100yds/hex; 15 min./turn. 21 different types of terrain on the TEC. Morale ratings from 11-66. 12 point unit facing and flexible extended line options. As a result of a morale check a unit can take cover, become shaken, rout, or rout move. Simple but effective command and control rules: the further a unit from its HQ, the lower its movement allowance. A unit moving more than half its MA loses firepower during the enemy portion of the turn; if it moves more than its printed allowance (fatigue rules), it can't fire during the enemy portion of the turn. The game is so detailed, it includes stubble markers for use when Miller's Cornfield is mowed down by fire, and has a beehive rule for use if Mr. Roulette's beehives are smashed by artillery fire. Designed by Kim Turner, James Murphy, Arthur Mitchell and David Buchbinder. "No other pre-20th Century game has anything like its historical accuracy and richness of detail," John Kisner wrote in a review in 1978, when TSS had a lock on the top spot in SPI's game ratings. "The game is by no means perfect, even disregarding its physical shortcomings, but with its publication, the state of the art in 19th Century tactical games has made as broad and deep an advance as it did with the publication of the original LA BATAILLE DE LA MOSCOWA," he added.