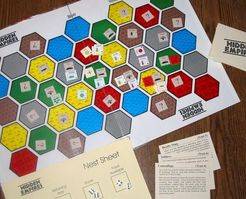 Hidden Empires is a print-and-play game for 2 to 6 players where each player assumes the role of an ant colony. Players deploy worker ants on an abstracted hex-area map to look for and forage food. Colonies use food to produce more workers to produce more food, etc. Eventually colonies grow large enough to produce reproductive male and female ants. Players score points for each reproductive ant released during a nuptial flight. A deck of cards provide environmental events and different genetic traits for the various ant species. Conflict between colonies is possible but is not the primary focus of the game. All events, traits, and general game play are based on the natural history of actual ant species. As of 2012 a new version, Hidden Empires II, is available.