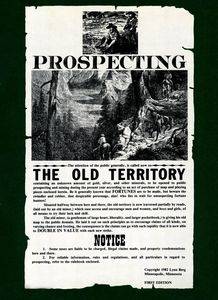 Prospecting is, as might be imagined, a game of prospecting somewhere in the 19th-century American West (the map is not of a real area, although the place names are similar to some found in Montana). The map is divided into numerous small areas which the players claim and then attempt to find something in. Every area has a potential number which indicates how likely it is to find something (fertile soil, coal, copper, silver, of gold) there. Each number has an associated set of outcomes for a 2-dice roll, which in addition to finding something include action cards from the deck, action cards from other players, income, and monetary penalties. Areas not likely to produce soil, coal, or minerals are more likely to provide cards or income. Once you find something, you get paid for the claim and that area is done with. Some things pay better than others, with gold of course paying the most, but this is offset by the fact that making the same strike in an adjacent area will pay double (and a third will double again, etc.), and the less valuable items are easier to find. Action cards can be used to rob or tax other players, travel faster around the board, squat on someone else's claim, etc. The "take that" effect is presumably somewhat reduced by the small hand size (2 in a 4-player game). The attention to usability in the components is somewhat unusual for a self-published game of this vintage. Each player gets a "calculator" which lets you slide a cardboard strip up and down to get the dice-rolling chart for each claim potential (and robbery attempt) individually, instead of having to look it up in a larger chart. In addition, each calculator has on it a probability table which shows the total percent chance of each possible outcome for each claim potential, and a list of all the action cards and their uses.