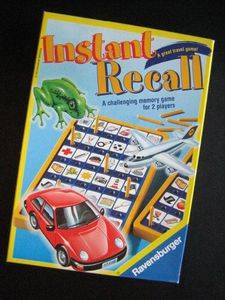 In Instant Recall, a.k.a. Bilderjagd, players each have a game board with 36 objects on it. They take turns naming an object, and when they name something, they mark it to keep track of what they've said — but they can't mark what other players have named! Instead they must remember all of those objects and avoid them when naming something themselves. Whoever first names something said previously be an opponent loses the game, and everyone else wins. The reverse side of the game board features the numbers from 1 to 36, so now you have to remember which digits to avoid instead of which objects.