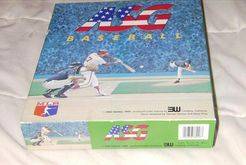 ASG Baseball is a tabletop baseball simulation which uses individual batter and pitcher cards and dice to accurately recreate games between Major League Baseball teams. The game's distinctivie design feature is that batter-pitcher encounters are resolved by rolling the dice and consulting the pitcher's card. In some cases the outcome of the play is determined directly from the pitcher's card. In other cases the pitcher's card may direct you to a specific column (one of six) on the batter's card for the play result. The columns on the batter's card are organized to reflect the batter's normal, above-normal, and below normal batting average and slugging percentage. Advocates of the game argue that dominant pitchers are more realistically simulated by this play design in that they exert more control over the outcome of each at bat than is the case for better-known baseball boardgames such as APBA and Strat-O-Matic. ASG also includes clutch hitting, errors, fielders' range, fielders' arm strength, infielders' double play ability, catchers' pitch calling, balks, wild pitches, stolen bases, stamina and unusual plays. The game was introduced in 1973 with player cards based upon the 1972 major league season. The following year the company issued player cards based upon the 1973 season. Afterward, faced with demands from the Major League Players Association for royalty payments for the use of player and team names, the game creator ceased production until the game was resurrected by 3W Games in the late 1980's. Later, the board game was adapted to the personal computer and the software was sold under the name Diamond Dreams. As of 2011 neither the boardgame nor the computer version is being produced and marketed.