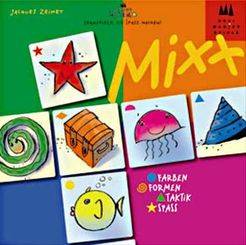 Each player has up to 8 face up cards in front of him. On his turn one card has to be added to the existing columns and rows. The other cards in the same row must never have the same motive as the played card or the same color as the played card in the same column. Afterwards a new card is drawn. The last player able to add a card receives all played for victory points and a new turn starts with the player with the least points. Game ends as soon as the draw pile is exhausted - the current turn is still played. The game has colorful motives with sea animals displayed. Ages 6 and up.