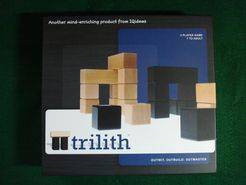 On a square board players take turns placing cubes (sarsens) which may be played on the ground or on any piece of your color, and (3x1) rectangles (lintels) which can be placed in such a way that they are supported at both ends and are supported by exactly two blocks of your color and optionally one block of the opponent's color. The simplest configuration therefore resembles a mini Stone Henge (hence the name). The space in between can be empty or occupied by a piece of either color. One player is attempting to connect the top and bottom of the board and the other player the left and right edges. Connectivity is judged as seen from above so that higher pieces can cut the connection of lower ones. Or to quote the rules: Two sects of Druids want to build a monument on the same sacred site, however there is some conflict. The followers of Horizontus believe that the monument should track the sun from the East horizon to the West horizon to worship the passing days, while the followers of Verticalus believe that the monument should track the sun from the North to the South to worship the passing seasons. The game has several variants including a version played on a hex grid (also playable by three) and both the hexagonal and square versions have a "Druid's Walk" variation in which an additional piece represents a druid out for a stroll. Online Play Gamerz (turn-based, play by email or play by web)