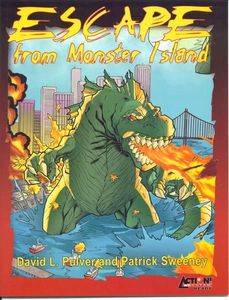 The publisher sometimes describes this as a sequel, but note that it is an expansion and requires the original game. Comes in the form of a 32 page, saddle-stitched book. From the publisher's website: Alien saboteurs have collapsed the force bubble around Monster Island, unleashing hordes of titanic terrors on the nations of Earth! Giant creatures trample the great cities of the world while conventional military forces and special UN Science Alert Corps units struggle to contain the monster menace. Tanks, attack helicopters and infantry pound rampaging kaiju as laser cannons, jetpack platoons and other experimental weapons deploy. A sequel to "Monster Island: The Game of Giant Monster Combat," Escape From Monster Island provides expanded rules for fighting military units and crushing cities for your kaiju. Or you can play the military forces battling the monsters, using color cardstock counters included in the game or your own plastic soldiers, tanks and other toys. game also includes new kaiju powers along with dozens of new quotes from your favorite monster movies. Players must have Monster Island to use this expansion. Expands: Monster Island