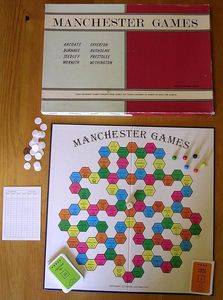 8 different games, using a board which represents Greater Manchester (England), in as much as each of the spaces is named after a Greater Manchester place name and the positions are approximately related to geography. Wigan borough place names have been excluded presumably because it upsets the symmetry of the board. As well as the board, the games use counters, different colour skittle pieces. Some of the games use a die and/or cards. The rules to each game are brief (one A5 sheet or less) and simple. They have varying degrees of tactical scope. Some are race games but most are abstract strategies. The main appeal is the use of local names, assuming that the player is 'local'. Some of the games use a random element in the piece set up (by drawing place name cards), some of the games use a random element in the movement allowance. Only one game, Werneth, has no random element. The limits in the number of players for each game seems to be more a function of the pieces issued rather than game balance. There would seem to be scope for adding players if extra pieces were drafted in from another game. ANCOATS (2-6 players) is a movement game. Ability to move depends on the colour of the card drawn, the colour of the space the piece is on and the colour it is moving to. The winner is the first player to land on the three places determined by a random selection of three cards at the start of the game. BURNAGE (2-6 players) a movement game collecting cards at each space visited, or challenging other players for the cards they have collected. The winner being the first to collect a predetermined number of cards. In OFFERTON (2 players) the start location of pieces is randomised by cards. After that, distance of movement is determined by the points on each space. The winner is the fist player to get their six counters in a contiguous line. PRESTOLEE (2-5 players) is a die movement game. The winner is the first player to move to all 16 spaces of the player's colour, collecting a card at each location space. RUSHOLME (2-6 players) has randomized set up, but movement is then dictated by the points and colours of each space. The winner is the first to collect a specified number of counters distributed around the board. SEEDLEY (2-4 players) is a card game which uses the board for reference. A player can only pick up a place name card off the discard pile, if they are discarding an adjacent place name. WERNETH (2 players) Players take it in turns to place a counter on the board, until there are 12 in total. They then place their coloured skittle on the board. They then take it in turns to move the their skittle according to the points on the space, restrictions on combinations of the colour of the current space, the space it is moving to, the colour of the skittle, or the presence of a counter or opponent's skittle. The loser is the first player who cannot make a legal move on their turn.