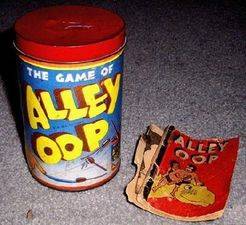 Alley Oop was a popular North American newspaper cartoon strip during the 1920s, 30s, 40s and beyond. The game comes in a cardboard 'can' container with tin lids. The drumstick-like pieces in the game are elongated round wooden bulbs attached to wooden sticks. There are four of each color used in the game. They are the stylized clubs used by "Alley" and his friends in the cartoon, and are known as "Oops". The lever-like pieces are also made of wood. Each of these pieces are placed on a table, pointed side down, and with a "see-saw" movement can propel an "Oop". The idea of the game is to place the head of an OOP over the groove in the FLIPPER then strike the FLIPPER downward, thereby sending the OOP into the air and (you hope) into the CAN. Game consists of: 3 OOPS in each of four colors, Green, Yellow, Blue and Red OOPS 1 Black OOP (Foozy) 4 Colored Flippers (colored as OOPS) CAN. Instruction Sheet Each OOP, according to color, represents a different value. GREEN - 1 Point, YELLOW - 2, BLUE - 3 Points, RED - 4, BLACK (Foozy) - 5 Points.