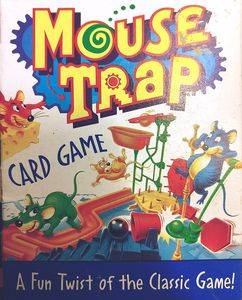 This game was released with the Battleship card game in 2002 and comes in similar packaging. Set up involves multi-directional double-sided 'maze cards' on which the mouse moves on and responds to during the game. The cards are arranged at random in a square and each game will have a differing arrangement which can also change during play. On a player's turn, the mouse is placed on the starting 'maze card', cheese is placed somewhere in the maze, an 'action card' is drawn and responded to - which involves movement of either the mouse or the maze cards - and if desired, a second action card is drawn and responded to. Just as in the original mouse trap, players must move the mouse to collect an amount of cheese and upon being 'trapped' all cheese acquired in that turn is lost.