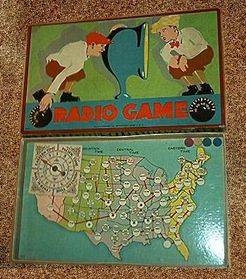 The inside of the box lid on one version states the rules for four different game variants. The common theme is trying to broadcast messages on various radio stations. On the game board is a stylized map of the United States, indicating the boundaries of each state. The map is in four colors, and each color indicates a time zone: red: Pacific Time green: Mountain Time grey: Central Time yellow: Eastern Time Circles across the map are joined by red and blue lines, to indicate the two dominant national radio networks, NBC Red and NBC Blue. These lines are the tracks for movement of the players' circular cardboard counters. A spinner is used by the players to determine their movement around the board. A metal arrow in the center of the card is spun by a player to determine their move. The outer circle on the card is divided into the four US time zones. Within each zone are the numbers 1, 2, and 3, indicating the number of spaces to move. Several versions of this game have been manufactured, including by Alderman Fairchild Company of Rochester, NY, and by Milton Bradley.