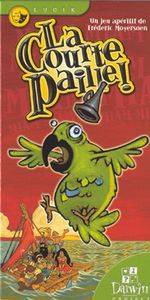 A curious game playable in two variants. In both games, a variety of piratical types are adrift on a raft and gradually some get thrown in the water. At the end of the process, one type is left on the raft and you score for each card you have kept of that type. In the short game, you go through the process once, in the long game, you repeat the process, removing cards from the deck each round. The cards have nice graphics of the crew, the captain, the cook, the look-out, the cabin-boy, the dancing girl, the parrot and so on, each with values 1-9. Players are dealt a hand and five cards are dealt up in a row, and several cards are dealt face down in a column. The first of these is turned up and each turn the next is shown. At the end of the round, the type with the majority points is the one ejected. Players play one card from their hand and draw from the row, and so try to manipulate events, especially by using the parrot. Unlike the others, the parrot has special abilities, allowing you to sneak a look at the last 2 cards in the face-down column, add another card to the column or thrown one out. It took a while to get the hang of the game and it's an odd mix of switching tactics, but the long variant may be too elongated for repeated play.