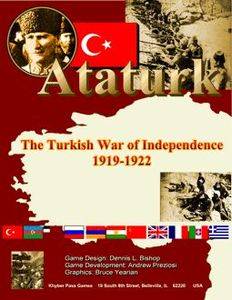 (From the game flyer) Ataturk is a simulation of the War for Turkish Independence fought between May, 1919 and October, 1922. The game is for two players, one representing the Allies (British, French and Greeks), Caliphate Turks, Armenians, Kurds and Soviets, and the other player the Turkish Nationalist Army, White Russian Volunteer Army, Georgia National Army, and Azeribaijan National Army. Ataturk Contains: one 11"x17" map over 250 counters one 20 page rulebook various player aids