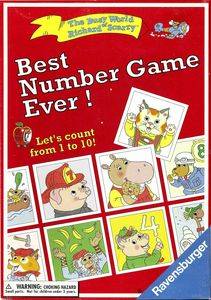 This matching game uses entertaining illustrations of Lowly Worm, Huckle Cat, Hilda Hippo, Sergeant Murphy, Mr. Frumble, Bananas Gorilla, and other Busytown characters from "The Busy World of Richard Scarry" to help children understand basic math skills. The six game boards vary in degree of difficulty from the first, which teaches youngsters to count objects, to the last, which stresses number recognition. Includes rules for several different games including memory games with adding and subtracting, rolling the dice to add the numbers to fill a game board, and a fast-paced game of "tens" in which players try to collect pairs of cards that add up to 10.