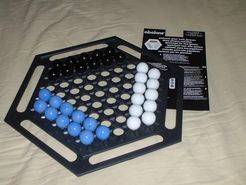 By purchasing extra sets of marbles, Abalone can be played with 3-6 players, expanding the situations in which an otherwise two-player game could be brought to the table. Where two players each play with 14 pieces, expanding the game allows each of three players to use 11. Or, with a fourth color, four players play in two teams, each player having 9 marbles. A fifth color allows for an unusual five-player variant in which the four players who start at the edges each have 8 marbles, but the center player starts with 7, to compensate for the advantageous start position. Finally, a sixth color permits six players to play in three teams, each player having 6 precious marbles. In addition to these variants to accommodate varied numbers of players, the extra marbles can also enable numerous other variants to be played.