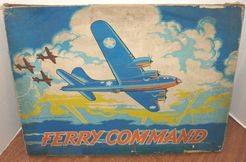 Ferry Command is a game in which each player is an airplane pilot ferrying mighty Flying Fortresses to ports near the war front in various parts of the world, which are indicated on the playing board. As the Fortresses carry all the cargo possible to the fighting front, their progress outward bound is advanced by the throw of only one die; but the pilot’s return flight is made in a fast flying plane, traveling light, and its speed is accelerated over the route by the throw of two dice instead of one. When one player has completed five round trip flights the game is ended. The players count up their totals of the numbers on the Cargo Cards they have drawn, and the one having highest total wins the game.