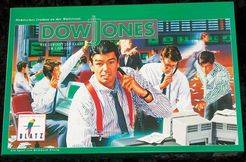 Dow Jones is a new version of Nicht geheuer im Gemäuer with a stock market theme. It contains a game board, 14 pawns (2 each in 7 colours), 1 'hausse' marker, 21 'baisse' sticks, 20 cards (stock certificates), 3 dice (one six-sided, one 12-sided, and one 20-sided). The game board is a grid of 12 by 20 squares. Each player receives 2 pawns and 3 'baisse' sticks. The stock certificates are ordered by value and placed face up next to the board, with the lowest value on top. One player rolls the special (1 12 sided, and 1 20 sided) dice and places the 'hausse' marker on the corresponding space on the grid. Players now roll the 6-sided dice to move one of their pawns onto the square with the hausse marker. If a player's pawn reaches the marker, that player receives the top stock certificate. The hausse marker is then placed on the game board by rolling the special dice as described above. In addition, if a player hands in one of their 'baisse' sticks, they can immediately roll the special dice to move the marker (on their turn or on another player's turn). The game ends when a player receives the last stock certificate. Each unused baisse stick is worth $50,000, and the player with the most money (stocks + unused baisse sticks) wins.