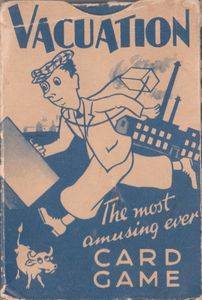 A Pepys Card Game released after the beginning of World War 2 with a related theme. Subject of the game is the evacuation (hence the name of the game)of children from the large British cities to the calm and safe sites of the country. Object of the game is to get rid of all his cards first. Game consists of 44 cards with different letter codes and some extra cards. The game is similar to UNO with the winner the person who empties their hand first. Players in turn discard Girl, Boy, Householder and Teacher cards, following suit until a Master card is played. Two packs are used to allow more than 5 to take part. The starting player lays out a card which the next one in line must follow suit. If he can't, he picks up a card or changes suit with one of the master cards. Extremely tricky are the two extra cards: ALARM and EXTRA GAS MASK allow to take some special action.