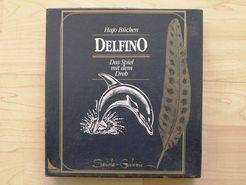 The game has 25 large tiles showing a dolphin leaping from the water. The dolphin's beak and tail occupy two corners, the dorsal fin a third. A grid is laid out 5x5 (or smaller depending on players), and players have a half sphere token and a die to show their points score. The players roll a larger die and move their marker about the tiles, rotating the one they laid on clockwise. When 4 tiles are made to point together, the player scores a point and 5 points wins. Players can also move tiles into stacks. Nice components and an interesting game, but it may lock up.