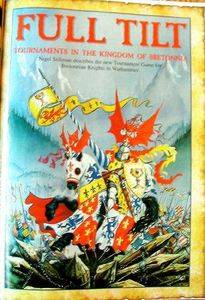 Full Tilt is a three round tournament between rival teams of Bretonnian Knights who joust for a grand prize, and most important of all, the honor of victory. Players need to provide models of knights, but the cards, counters and cardstock terrain are provided with the game. Points are scored for knocking the opposing knight off of their horse or by breaking fewer lances than the opponent. The winner is the team of knights with the most points after three rounds. Originally published in Games Workshop's White Dwarf magazine, issue #215.