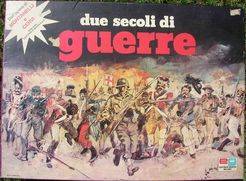 In 1982 two Italian journalists and historians, Indro Montanelli and Mario Cervi, published a 10-volumes encyclopedia about the history of the modern wars: from American Revolution to latest conflicts (Korea and Vietnam). The name of the work has been Due Secoli di Guerre: “Two Centuries of Wars” Emilio Ceretti, chief of the Editrice Giochi, asked to Alex Randolph to invent a boardgame inspired to the encyclopedia. Being impossible to simulate battles in a period of time from gunpowder to jet fighters, the result is a sort of an abstract wargame which tries to contain some fixed elements of war: strength vs. mobility, random factor, and bluff. The game components are: -a board with an irregular tessellation -60 grey pieces with 3 holes each -120 flags, 30 for every color (red, green, yellow, blue) -the “bluffing bell” Every player gets 30 flags of his color, and places them on 15 grey pieces. A piece with 3 flags has strength 3 and can move one space. A piece with 2 flags has strength 2 and can move up to two spaces… and I think the readers can guess the features of a piece with one flag on it… Every player enters his units in the map from one side, and tries to win being the first to reach the opposite side with one of his units. The combat system is quite original, and uses the “bluffing bell”. This is a little device similar to an hand-bell, containing two little 6-sided dices. Shaking the device makes the dices roll, and pressing the device on the table causes the dices to be blocked on their result. After the pressing of the “bell”, the player who is using it can pull it up and see the result, without showing it to other players. The player can repeat the shaking a number of times equal to the number of his flags involved in the combat, until he is satisfied (or wants to feign to be satisfied) by the result: at this point he can declare a result (obviously he can declare a number different from the real one!) The opponent can now accept the declared result, and then try to get and declare an higher number; elsewhere he can try to see the bluff… Entering the central red square allows the player to aim an “artillery shot” to an enemy unit. According to Alex Randolph’s ludography compiled by Philippe Evrard, “Due Secoli di Guerre” has been published only in Italy by Editrice Giochi, and there is no report about editions in other countries.