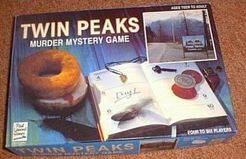 The famous television show by David Lynch and Mark Frost was one of the pop culture hits of the 1990's; in this British board game the players each take the role of one of the show's principal characters and try to discover who BOB is using as a host to commit murders. The game includes: Playing Board 1 arrow spinner (attaches to Playing Board) Agent Cooper's Handbook (rules) 6 Pentagon Puzzles (30 pieces in total) 1 Pack of Suspect Cards (50 cards in total) 75 Donut Counters 1 Regular and 1 Poker Dice 6 Playing Pieces