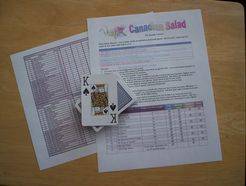 This is card game in the Barbu family. It uses one or more regular decks (depending on the number of players) and has 12 sub-games, all of them negative (Red, Even, Tricks, Hearts, Face Cards, Sevens, Aces, Queens, One-Eyed Face Cards, King of Spades, Last Trick and All of the Above). There are suggested sub-game subsets for different play lengths. If there is more than one negative hand that can be given out in a round then collecting all of the negative cards scores the other players 100 penalty points. Canadian Salad is also the name of an alcoholic drink.