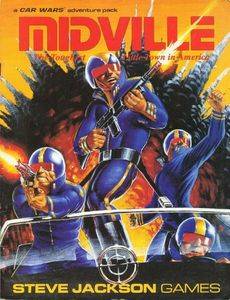 Welcome to Midville, now go home. Midville, Ohio used to be a nice, sleepy little Middle-American town. But that was before the cycle gangs came...and left just as quickly with their tails between their legs! Now it's one of the most famous towns in America, thanks to UBN's hit show, Crash City. And all the Crash City fans are showing up to see if Midville is really "The Toughest Little Town in America." Midville is a city with a rep to protect -- if you're a visitor you'll get the right hand of friendship extended in a neighborly fashion. But if you're a biker, or anyone else bent on causing trouble, you better watch out. The MONDOs are the toughest neighborhood watch team this side of the Texas Rangers! But if you're looking for action, Midville is the place. If it isn't an over-exuberant Crash City fan shooting up downtown, it's a full-scale battle between MONDOs and whoever happens to be closest! Midville gives you a look at a not-so-typical small town of the 2040's. Inside you'll find: A 24 page rulebook with background, descriptions and scenarios. Four 21" x 32" maps, which can be used on their own or with maps from Car Wars Deluxe Edition or Boat Wars. An 8" x 10" full-color counter sheet containing everything from dueling teams to city vehicles. Part of the Car Wars Series.