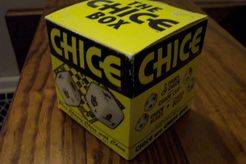 "Play Chancy Chess with Chice" Chice is a chess variant that uses two dice (called chice just one is a "chi"). The dice have faces with various chess pieces. After each player makes an opening move, they each roll both chice on their turn. You must move one of your chess pieces as shown on the chice (your choice of which). No legal move? You lose your turn. Roll doubles, you can move the same piece twice or make one move each with two different men (for example, both rooks). Roll double kings, and move your king like a queen!