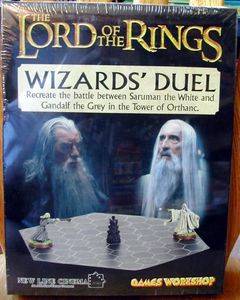 This mini game recreates the sorcerous duel between Saruman the White and Gandalf the Grey in the main chamber of the Tower of Orthanc. It is best played with the models from 'Escape from Orthanc' boxed set but any models of Saruman and Gandalf will do. Players take turns rolling for priority to attack first each round and the game is played until one wizard has taken 16 wounds and falls. The game ends immediately so if a player loses priority and his opponents attack inflicts the final wound the game is over. Each player simultaneously chooses an attack and defense spell, when both have chosen the choices are revealed and carried out using the attack of the player with priority first. Spells have 2 effects of strengths that vary, push and crush. Push moves a wizard and Crush inflicts wounds. The defense spells will stop some or all of these effects. Once the priority player has resolved their attack the other player resolves his.