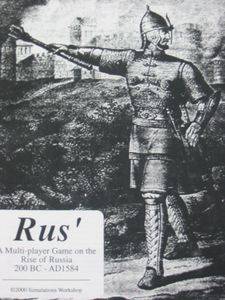 A multi-player game on the Rise of Russia, 200 BC - AD 1584 Rus is a game for 4 players. Each player guides 8 national/ethnic groups over the course of 1700 years of Russian history, from the demise of the Scythians to the death of Ivan the Terrible. Players lead the Huns, Goths, Mongols and other groups that ravaged ancient and medieval Russia. The great city-states of Kiev, Novgorod, and Moscow will rise and fall. Alexander Nevsky will battle the Teutonic Knights, the Vikings will sack cities and make epic journeys, and the Mongols will destroy all in their path... Those familiar with Britannia will recognize and be comfortable with the game's movement and combat system immediately. Like it, this game has a very detailed unit appearance schedule and scoring. However, movement and combat are very simple, somewhat comparable to Risk or Vinci.' (source: game rules and user's description)