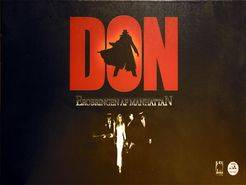 DON - Conquest of Manhattan plays on three elements: Strategy, Diplomacy and Business. In a world of prostitutes, pickpockets, henchmen, assassins, smugglers and politicians, New York is the hometown of 5 of the most famous mob-families in history. You start of as a low-level gangster and have to work your way up with a big family, lots of weapons, money, and people, and ultimately you will control the whole town. FBI, CIA, and ICR, in addition to other mob-families will make life difficult for you. DON is Mediamobster's first game ever, and is basically their boardgame version of "Gangland", which was released for the PC in 2004.