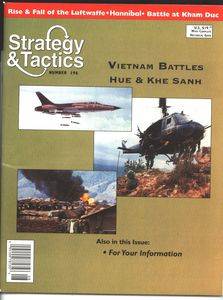 Vietnam Battles: Hue and Operation Pegasus These two games, Hue and Operation Pegasus , were both were major battles of the 1968 Tet Offensive in The Republic of South Vietnam. Hue simulates the fighting for the old Vietnamese capital at Hue. This was one of the longest and most intense battles of the 1968 Tet Offensive. Hue has two scenarios. The Standard scenario covers the first stage of the battle. The Extended scenario follows the fighting all the way through to the final Allied victory. Both scenarios are set up in the same way. Operation Pegasus simulates the operations surrounding the U.S. Marine Corps firebase at Khe Sanh. The game has two scenarios. The Lang Vei scenario starts with the Communist assault which overran the Lang Vei Special Forces camp and includes the possibility of a fullscale Communist assault on Khe Sanh itself. The Relief scenario covers the airmobile attackby the U.S. First Cavalry Division (Airmobile) which relieved Khe Sanh. Each Pegasus Scenario has separate deployment instructions and victory conditions. The Vietnam Battles game system is a grand tactical simulation of combat during the Indochina Wars. Each game in the system represents a major battle between Allied and Communist forces. The playing pieces represent the aütual units which participated in the battles. The maps represent the terrain over which those units fought. Several key factors of Vietnam War operations are simulated, including the interaction of conventional and guerrilla forces, firepower versus mobility, and the utilization of helicopters and airpower. There are two players. One represents the Communists (Viet Cong and North Vietnamese Army); the other the Allies (United States, South Vietnam, and others). The rules are divided into the Standard Rules, which are common to all games in the system and the Exclusive Rules, which provide deployment, reinforcement and . victory instructions for each specific battle. The standardization of rules makes it easier for the gamer to play games within the series. Certain rules are designated Optional. This means the players may utilize them at their discretion; optional rules are not necessary • for the play of the game. Optional mies add additional complexity. Released with Strategy &amp; Tactics magazine #196 (March/April 1999). Game Scale: Hue Game Turn: 1 day Hex: .31 miles / 500 meters Units: Company to Battalion Pegasus Game Turn: 2 days Hex: .62 miles / 1 kilometer Units: Company to Battalion Game Inventory: One 22 x 34" full color map One dual-side printed countersheet (280 1/2" counters) One 16-page rulebook Solitaire Playability: High Complexity Level: Medium Players: 2 or more Playing Time: 4-15 hours Players will need to provide one 6-sided die for game play.