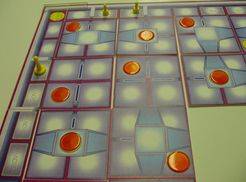 Double Morphus has a frame you assemble, 18 tiles (nine with yellow circles and nine with orange circles), 20 energy discs in two colors, 2 pawns in two colors ("trovers"), and 6 small pawns in two colors ("guards"). To start the game, you assemble the frame pieces, which create a space large enough to hold 20 tiles. Players alternate placing tiles in the frame - each player places the tiles with his opponent's color on them. When finished there will be two empty spaces in the maze. Put an energy token on a every circle of its color, and each player starts with one energy token in their reserve. Trovers and guards are placed in opposite corners and the movement part of the game begins. On your turn, you move all your pieces. Guards can move up to five spaces orthogonally, while trovers can move like guards but also diagonally. Trovers are the only pieces that can pick up energy tokens - you can only collect your own color. Guards simply block your opponent's trover, though if he pays one energy token he can move by a guard. The tiles create a two-level maze, with ramps printed on the tiles to change between levels, and walls occasionally to force movement around them. You can pay one energy token to have your trover jump down from the upper level to an adjacent lower level space. If you spend an energy token, you can "morph" the maze: move a tile to an adjacent empty space. You may do this as much as you like and can afford during a turn. Morphing does not allow you to rotate a tile, only slide it to an adjacent, empty space. The first player to collect all nine energy tokens of his color on the board wins.