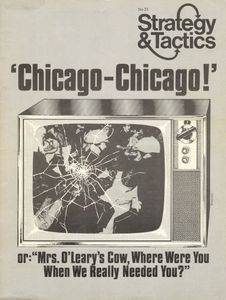 A game on the clash between protesters and police at the 1968 Democratic National Convention. Released with Strategy &amp; Tactics magazine #21 (January 1970) along with Flight of the Goeben. Also available from SPI as a separate game. Per Jim Dunnigan "[Chicago, Chicago! was a] serious attempt to model the situation...Non-war games were never expected to be hits...While most game topics were selected by S&amp;T readers, we did allow ourselves an "editor's choice" once a year, and this was often something like the Chicago game." Dunnigan went on to say he didn't favor the hippies or cops in the conflict. "I was always interested in modeling non-military conflicts. You can't take sides if you want to do it right." (e-mails with Neopeius, 9-13 and 14, 2011)