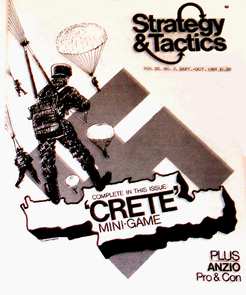 Published in Strategy &amp; Tactics magazine#18. "Crete" is a simple World War 2 operational wargame of the German invasion of Crete in 1941. Per creator (Jim Dunnigan): "We needed a game for the first issue, and it had to be kind of small. I was into the origins of air-mobile ops at that time, and felt Crete would be more suitable than some of the ops Kenney and MacArthur dreamed up in New Guinea. The battle was well documented and designing it was easy." (e-mail with Neopeius, 9-5-2011)