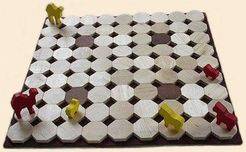 Contents: 1 brown felt game board; 81 wooden octagons (plus one extra piece); 2 camels; 2 zebras; 2 lions; and 1 rules booklet. The Object of the Game: Summary - It's pretty simple: You win if you can make at least one move after your opponent can no longer make any moves. Both players take turns moving one of their three animals (Camel, Zebra, or Lion). After each move, turn over the octagon that the animal stood on before the move. Since you cannot move on or over octagons that have already been turned over, it is only a matter of time until one player is unable to move any of his animals - and the other player wins. (Let's hope it's you!).The winning player receives one point for every move that he/she is able to make after her/his opponent's animals are stuck.