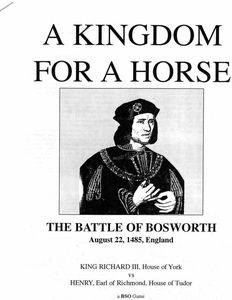 "A Kingdom For A Horse" is a Renaissance wargame that covers one of the more important battles in English history: Bosworth (1485), wherein, Henry, Earl of Richmond, defeated King Richard III - the much maligned, but still infamous, supposed killer of those two poor little Tower Tykes - and gained the English crown for the House of Tudor as Henry VII." Desktop published containing an 11" x 17" color map, 140 color paper counters (to cut and paste), played an indeterminate number of turns until one side achieves Victory.