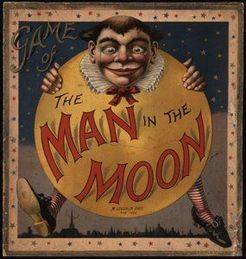 A board of twenty-five squares and two sets of twelve counters in contrasting colors compose The Man in the Moon. The object of the game is to avoid becoming the "Man in the Moon". The first player places one of her counters on any space on the board, except the center square. Then the second player places one of his counters on any space on the board, except the center square, and so on until the twenty-four counters have been placed, leaving the center square empty. The first player now moves one of her counters to the center square. The second player then has his turn, and each then plays in succession. The counters may be moved orthogonally, but not diagonally. When a player flanks one or more opposing counters between two of his own, they are all captured as long as there are no intervening empty spaces. (Similar to Othello's flanking conversion.) Counters may be captured only by a moving player. If one or more counters are caught between two opposing counters while the counters are being placed on the board, it does not count as a capture. Capturing does not begin until all twenty-four counters have been placed on the board. If a player cannot move because her counters are blocked, the other player must continue moving until the blockade is raised. Then the blocked player takes her turn and play goes on as before. This rule also applies to the first move of the game. The player who succeeds in reducing her opponent to one counter wins the game, the single counter left on the board becoming the "Man in the Moon". Online Play Super Duper Games