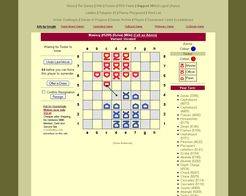 The Mastery playing field is an ordinary checkerboard (an 8x8 grid). Each side consists of thirteen pieces: three Masters, four Officers, and six Pawns. Each side's pieces should be easily distinguishable by color. A Mastery set can be built easily by scavenging the pieces from two identical chess sets, using Rooks for Masters, Knights for Officers, and Pawns for Pawns. There are two ways to win. If either player ever loses (A) all three of its Masters, or (B) all of it's Officers and Pawns, leaving nothing but one or more Masters, that player has lost, and the game is over. Either side may also resign the game to his opponent. There are no conditions for a draw in Mastery according to the game's formal laws, but many "house rules" exist for determining draw conditions. Online Play Super Duper Games