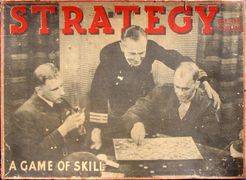 This game is a game of World War II vintage, which was first published in Australia in May 1940 by G.N.Raymond Ltd Pty (Collingwood, Vic), and soon also released in New Zealand, with Williamson Jeffery Ltd acting as agents. While the Australian patent application failed, the New Zealand Application succeeded. The game can be found in Australian advertisements from May 1940 to January 1945. Three versions of the game are known exist: 1) first Australian version, with Bakelite counters (G.N.Raymond 1940) 2) second Australian version, with cardboard counters as war-time austerity measure (G.N.Raymond ~1942) 3) New Zealand version, with wooden counters (Williamson Jeffery Ltd 1940 or 1941) The game board consists of a mirror-image painted land and sea terrain with an overlay of circles connected with diagonal lines to indicate movement possibilities between circles. Each side, Redland and Greenland, has 8 army division counters, 6 battleship counters and 4 aircraft counters which are placed in their respective labeled circles at opposite ends of the board. The troops can only move on land and can only get to the island in the center of the board with the aid of either aircraft or naval counters. The navy can only move on the sea and the aircraft can move anywhere on the board. The object is to be the first player who 'captures' forces by jumping them diagonally (like chequers) or the first player to gain possession of the island.